Mindo is a small town which lives from local and international tourism. The landscape surrounding the town is characterized by steep mountains which are covered in rich vegetation. The clouds from the ocean collide with the Andes so that this region gets a lot of rain.

We decided to make a little walk to a waterfall. A pick-up taxi brought us up the mountain. We were sitting in the back of the truck as it went up a steep and bumpy dirt road. On a little cabin we jumped off the back of the truck. We new that there was some sort of cable car that we would need to use in order to get to the path that leads to the waterfall. We did not expect what we saw.

A small cage, hanging on a steel cable transported people from one side of a large valley to the other. The cage was moved by a second small steel cable that was driven by a truck engine. A guy was sitting there, acceleration with food-pedals. After max. 5 people entered the cage, the guy put in 1rst gear and accelerated the steel cable, shifting to second gear as the load was getting some speed. To get the cable car back from the other side of the valley he was putting in reverse. 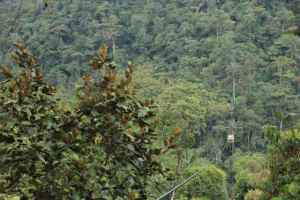 Cable car to the waterfalls

We paid our 6$ return-ticket and entered the rickety transport. There were 2 benches facing each other for 4 persons. The fifth has to stand and hold on to a cable. And off we went. It was quite impressive. This thing got pretty fast, swinging left and right. It started with the tall trees left and right and very quickly the treetops were far underneath us. The view was incredible. We could see the forest from a very unusual point of view. Safely arrived on the other side of the valley we started our walk to the waterfall. The path was winding along the mountains ledge. We were walking like through a tunnel of green leaves. In all shapes sizes and shades of green. In between once in a while some glowing red bloom.

The sheer variety of plants was mindblowing. The eye could hardly separate one from the other as they all grow on another and in another. A wild chaos of all kind of exotic plants with leaves 3 times as big as we are.

Humming birds flying to get the nectar our of the flowers, always a bit to quick to make it into one of my pictures. 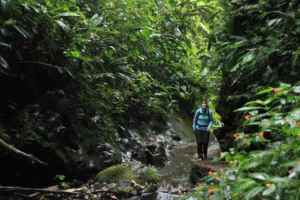 Once in a while you could see through the thick vegetation into the steep valley. This view offered the 3-dimensionality of this whole scenery.  As we walked clouds moved into the mountain range opposite of the slope we were walking along. The air was very humid, but fresh and cool.

It was a fantastic walk.

1 thought on “The cloud forest”