There is sand in the bottom of the swimming pool. Of course there is. They can clean it as often as they like, this is the desert. High sandy mountains rise up around us, lost a bit in the hazy morning air. The roaring trucks on the motorway suggest they have contributed to these milky hues. Despite the traffic and frantic horns of the mototaxis, it’s quiet and peaceful here. It is a paradox for the senses, the sound of the road and the calm of the lush garden here, half a mile away. The body relaxes in the warm, calm wind, with the sound of palms in the breeze, cheerful chirping of tiny birds and the cooing of doves on the rooftop.

In the night, the horns stop but the constant droning to the city continues. There are nine million people there who want fresh food and industry awaits precious minerals from inland Tarma and the Central Highlands which is at the other end of this dusty road. While dozing into the night, you can imagine it’s the steady white noise of the ocean which puts you to sleep.

The chaotic motorway connects one unremarkable dingy town to the next. We asked a mototaxi driver for a suggestion in the last town and he said there’s no place recommendable and suggested we keep going. There’s a country club ahead. There, the guard suggests pushing through to Lima, his colleague suggests a turn off immediately after the upcoming bridge. And here we end up, in a gated community of colonial estates just off the main road, our beautiful guarded oasis. 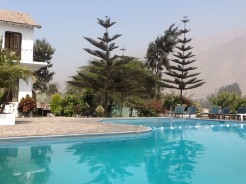 just a little sandy on the bottom

Mary by the Pool, she has flashy lights above her head at night. That’s Peru.

nice mix of new and old 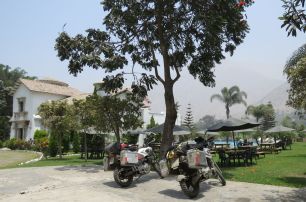 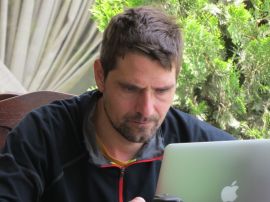