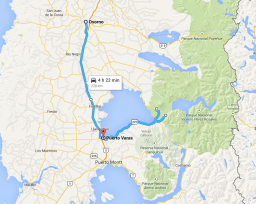 Osorno is not a very pleasant town. We only stayed here to get new tires and to get our steering fixed. Motoaventura is a BMW dealer and rents motorbikes as well. They had the spare parts ready, the tires we wanted on stock and they made a good and quick job.

We waited a few hours till everything was done, but the time flew by as a lot of other travellers (most from Argentina) stopped by and so we had a great time there. We were served coffee as well and had a fantastic lunch on a restaurant nearby.

We were glad that we did not have to stay another night though as the town has nothing to offer and so we continued to the Lago Llangquihue which is close by. The lake is incredible. It is pretty big and a fantastic snow covered volcano is towering on its eastern side. This whole region has been settled by Germans and they keep their traditions. So you find Bavarian restaurants, coffee shops offering “kuchen”, and a lot of names are German. We had a short stop in the town of Frutillar for a coffee in a theatre built directly at the water. It is a great building and it seems to be a fantastic theatre, offering room for 1600 people. We wondered how this little village would look like when 1600 people arrive there for the evening event.

The town of Puerto Varas has a fantastic view on the volcano as well. We stayed there and made a daytrip to the volcano and some neat waterfalls nearby.

We took advantage of the German influence and enjoyed an “Erdinger Weissbier” in the evening.

Great riding in the sun along the lakes on our way to Puerto Varas.

The volcano Osorno is a fantastic view, from all perspectives.

Short break on the riverside.

A stunning road led up the volcano.

We rode up to the volcano. There is a skiing area there and it is pretty busy in winter times. 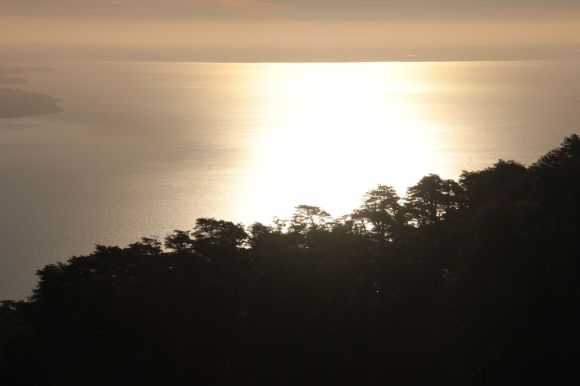 Sunset from the volcano

1 thought on “Lakes and volcanoes”