I know Padre Eduardo from the last time I was here in Peru. And my Mum knows him from her many visits here in Palca. He is a good friend. He knew my Dad. They both liked and respected each other a lot.

Padre Eduardo and his colleague Padre Luis are taking care of the needs of the people here in Palca. And they do this since many years, as they are both far over 30 years in Peru. And they do it with a dedication that blows your mind. 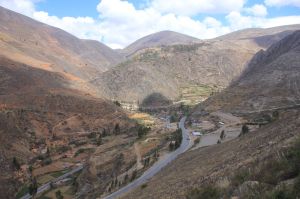 The high Andes near Tarma

The conditions to live in this part of the Andes are harsh. But they visit all the little villages up there in the high Andes. It is difficult to get up there. But people ask them to get a mass and so they go. They go as far as the 4×4 gets them. And then they walk. To the little “Nest” up there as the Padre puts it in German. They sleep in the houses of the poorest of the poorest, because they ask for spiritual succor. Because they ask for help.

Because the spiritual succor the two can offer have a lot higher meaning here in Peru than we can imagine. We have this so very different image of the church in mind that is present in Europe. Here this all means a lot more. This is what religion and church is really about. This is where people like the two padres really make a difference.

The two pastores in Palca, Padre Eduardo and Padre Luis

And they are dedicated. Padre Luis tells us his story of when he arrived in this area after he had spent 14 years in one of the most polluted cities worldwide, Cerro de Pasco. He has been working as a priest in different countries already and knew his ways around when things get difficult. So when he was asked in his first month in Palca to hold a mass in one of the little villages up the mountain he didn’t hesitate. Even though it was a long way up, even though it was a difficult rugged road up the hill, even though it was rain season. He jumped into his 4×4 and slowly drove the road up the hill. It became difficult, but he knew how to use the power of the 4-wheel-drive car and made it. After he held the mass, he picked up two young priests in another village and wanted to get down again. In the meantime it got dark, the rain had started and the road turned from a rugged road to a bad slimy and slippery mud pipe. The road went along a steep mountain with a 200m cliff on his right side. Going around a corner there was a landslide. They got out and worked with the shovels on the slide to make it possible to pass. After half an hour he decided to give it a try and got back into the car. He sort of slid through the passage as the tires spun in the mud. Suddenly the back of the car drifted to the right until one of the tires hung over the cliff. They all got out. Continuing was too dangerous, so they called for help. Eventually some people from the next town arrived with a couple of tools and ropes to securely get the priests car off the cliff and back on track.

The priest went to this village the following week and many times during the rain season again. 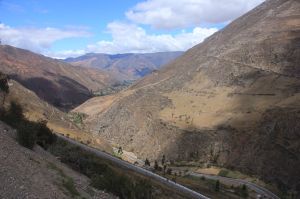 The slopes are steep and many little towns are very hard to get to, especially during rain season.

His colleague Padre Eduardo is from South-Tirol. A quite elderly, and wise man with a great sense of humor. He has a million stories to tell about his time here as well. During the main time of the activity of the shining path he was held hostage for a day. When the commander of the group pointed a pistol at his head and asked him to kneel down, he told him he wouldn’t kneel in front of anybody. The terrorist was impressed. They let him go.

Both persons are great and of an impressive coolness when they talk about the difficulties and dangers they had here, especially in the days of the shining path. People around them have been killed and slaughtered. And they were asked whether they would like to stay. All other authorities had left the area. But they stayed.

When Padre Eduardo was asked whether he was afraid he answered in his great humor: “No, tenemos dos pastores alemanes aqui”. (No, we have two german priests here.)

A great wordplay since pastores alemanes has a double meaning: it can mean “german priests” or “German shepard dogs”.

We were deeply impressed by these two old fellows. The braveness, their trust in God, their dedication, their will to help other people, their modesty.

It makes you ask yourself about your own attitude about the world that we live in.