Driving on the left is easy. Using the correct lever for the turn signal is hard.

As the driver is sitting on the right side everything is inversed in the car (except gas and brake pedals). So the attempt to use the turn signal resulted in the wipers going crazy on the windshields adding confusion to turning maneuvers and inner-city navigation. Oh well, we had a very clean windscreen the first couple of days.

There is a visible line where the two oceans collide

Christy crawling up the steep dunes 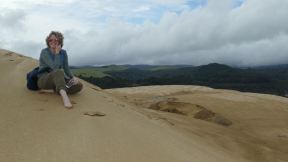 …and what a view

the strong wind sandblasted our feet

the dunes are really high there 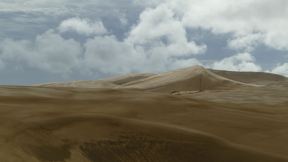 wonderful scenery with the clouds

Christy is having fun 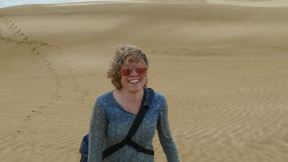 We arrived at the cape in pouring rain. It soon stopped and rewarded us with a dramatic scenery

There is a very pretty lighthouse at the (almost) most northern tip of New Zealand. We were warned of how many people are going there. But we were lucky. It rained pretty hard the next day, so we thought maybe we can get around the majority of the crowd.

And Tawhirimatea (the Maori God of Weather and Storms) was very supportive.

He sent strong winds and a lot of rain. It washed off most tourists and we were given a chance to use our super head-to-toe Gore-Tex clothes. With strong winds, the rain changed quite a bit. We set off on the walk to the cape just when the rain stopped, looking a bit nerdy with our full rain gear between the carpark full of people dressed in jeans and t-shirts.

But soon enough the rain started again and we were the only ones on the pathway. A short walk winds down the hill to the cape with the lighthouse. The clouds covered everything and so we walked in the middle of the thick clouds. Once in a while a little hole opened the view down to the shore or to the lighthouse. It was a fantastic atmosphere. The wind gusting the sea and the clouds. Not many other people there.

Then the clouds opened and the open sea became visible.

What you really see are two seas. The Tasmanian Sea and the Pacific meeting here at the tip of New Zealand. Mighty currents are visible and there is even a visible difference in color.

It is a mighty and impressive view.

Slowly more and more people arrived, since the weather had cleared up and so we decided to go back to find more beautiful places.

We did not have to drive very far. On the way up, we have already seen a sign for a turn off to the “Dunes.” Well, we like dunes so let’s have a look.

I have seen dunes in all variations, small ones in Tunisia, big ones in Morocco, really big ones in Peru, ones next to the sea in Chile, short curvy dunes in the Sahara and long straight ones in Australia.

But these rise in between a green and fresh jungle. They rise right out of the green and end in the blue waters of the Tasmanian Sea.

We walked around and enjoyed the fantastic views and later continued to a nice campsite at the Doubtless Bay.

I love how some of the names originated: Cook passed this place without looking at it in more detail, but wrote in his description that this was “doubtlessly a bay.”

On a short sunrise walk we enjoyed the calm and peaceful atmosphere before we continued to Piha.

2 thoughts on “Where mighty seas clash: the Northern Tip of New Zealand”