We had bad weather for 2 days, so we decided to take a “day off” in Latacunga. There is not much to do in the city so we slept in and had a real lazy day. The next day we packed just what we needed to climb the Cotopaxi and rode to the entrance to the park.

You can’t enter the park with motorbikes and it is compulsory to have a guide with you. So we stopped the bikes and negotiated with the guides. With David we started in his 4×4 towards the Cotopaxi. 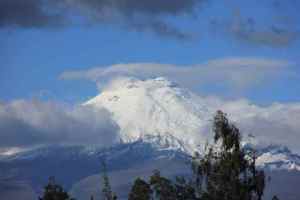 The volcano is still active and is one of the highest active volcanos. His last eruption was 100 years ago and he is getting warmer in the last years.

You can climb the volcano, it is an technical easy accent but takes it talls due to the altitude of almost 5900 m. With the guide you can drive the road up to 4300 m and ascent by foot to a mountain lodge at 4800m. 1 hour later you reach the glacier (yes, it takes that long for 200m …). 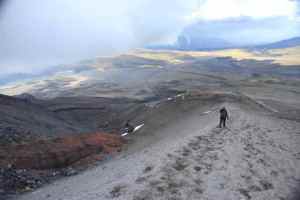 On the the way up to the mountain hut

The weather was still uncertain with lots of dark clouds sorruounding the mountain. So we were not sure weather or not we would actually see anything or whether we would just stumble around in the clouds.

You enter the National Park on a dirtroad which swerves between 3 volcanoes with Cotopaxi being clearly the major and most beautiful.

Suddenly the clouds on our right opened and for the first time we had a fantastic view on the northern flank of the volcano. Standing on a flat gras plane we could see the mountain building up slowly with gras covered brown earth. It was steepening up and the ground turned into a red more rocky wall which finally ended in a perfect white cone head.

The road steepened up and led in sharp turns up the volcano. The guide got busy driving. On some hairpin turns the road seemed to end in the sky.

Finally we arrived on a small area where David parked the car. A few hundred metres above we spottet the hut and started walking. It was steep, and a cold wind blew, but the sun was shining and with its intenseness it was quite warm. 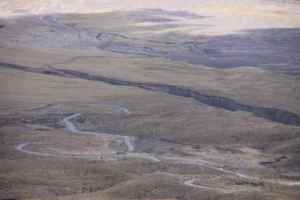 View into the broad valley of Cotopaxi NP

Even though we were already at 4300m the climb was ok, obvisouly we have been adjusted to the altitude in the meantime.

The view was incredible. The flat area underneath the volcano was spotted with shadows of small clouds that covered the sky north of us.

The east and west side of the volcano was in dark clouds. Just the north flank from which we were ascending was in the sun. We were really born lucky.

Great views from the Cotopaxi

After we reached the mountain lodge I wanted to go on the reach the glacier. The guide was a little bit unhappy with it, but he couldn’t leave we walking alone and so he and Christy followed.

We walked up the steep path. The view changed every minute and was incredibly beautiful. We had a lot of breaks to enjoy the view since the altitude was taking its toll.

The difference between the start of the hike at 4300m and the last bit from the lodge to the glacier starting at 4800m was amazing.

The 500m difference in altitude made it so much harder to breath. Its not a new thing to me in general, but the effect within such a small altitude difference really surprised me.

The guide said, that the ascent from the lodge to the summit is usually 5hours for trained mountaineers, 7hours for “good-in-shape”-tourists. And it is only 1000m difference in altitude.

The glacier summit of the Cotopaxi

As we reached the glacier the guide started to hurry us up, since the clouds were thickening and became very dark. He was afraid of a thunderstorm that would very quickly develop at this mountain. In fact we heard some thundering on the way down, but finally I think he just had a private appointment that he didn’t want to miss. We took our time to shoot dozens of pictures from this wonderful place and view.

The hike up the hill is quite breathtaking, not only due to the thin air

We were unbelievable lucky that day. With all the clouds surrounding us during the day, it could just as well been that we just stumbled around in the clouds, not seeing anything. I acutally found it wonderful to have all these clouds around us, since they created a dramatical atmosphere.

Dark clouds left and right of us

The “throat of the moon”as the name is translated in an indigenous language really meant it very well with us.

Our travel seems to get better and better….

5 thoughts on “The Cotopaxi volcano”