One of the places we wanted to see is the Quilotoa crater. The crater is filled with water, creating a great lake with steep walls that made the Incas believe the lake had no ground.

As so often the ride to Quilotoa crater proofed that motorbiking is more about the roads you ride on than the destinies you are actually going to.

Right after Latacunga the road led up the mountain in steep curves, offering a beautiful view into the valley and the momentarily erupting volcano of Tungurahua. We turned into a dirt road to get away from the main street for a short break. In the distance we could see a shepherd guarding his sheep and slowly moving from one place to the next, taking a short nap every time he moved himself for 100m. 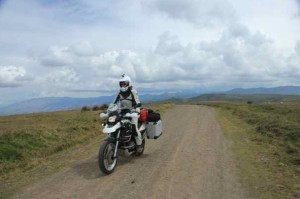 Getting off the road for a little break

The road kept curling through the mountains, which got steeper and rockier. Dark clouds moved in and we realized we would end up in the middle of a thunderstorm. We looked for a shelter and found it underneath the roof of a gas station where we waited for the rain to stop. The rain has cleaned the air, everything smelled fresh when we continued. The landscape became wilder and it seemed the rain has intensified the colors of the surroundings. Steep mountain slopes with fields, which seemed to be hanging vertically on the side of the mountains. Everything is painted in different shades of brown and ocher. We rode into a broad valley on a winding road.

Suddenly a canyon opens to our ride side

Suddenly a steep canyon opens to our ride hand side. Vertical walls lead down to a wild river in the bottom of the canyon. It is a landscape like from a fantasy movie. Christy said it wouldn’t surprise her if she saw a dragon sitting next to the road somewhere. The dark clouds and the sun shining in between them, the intensive colors, all which created an out-of-this-world atmosphere.

After the thunderstorm on the way to Quilotoa

We arrived at the Quilotoa crater just a few minutes before sunset, surrounded by clouds. Just as we approached the crater by foot, the clouds opened a little gap. The sun was shining right through that gap illuminating the tips of the crater and creating a fantastic double rainbow over the crater lake. It was more than beautiful. It was beyond kitsch. It was one of the most amazing views I have ever seen.

As the sun sets very quickly here so close to the equator, the whole scene only lasted a few moments before it got pitch-black. 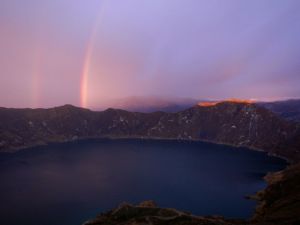 The next day we went back to the panamericana using another road that brought us back close to the Cotopaxi NP where we have been before.

Again we had fantastic views, another thunderstorm some dirt roads and Christy had her first little fall. Harmless and pretty unavoidable with her broad front tire and the very soft and slippery ground in a construction site of the road. 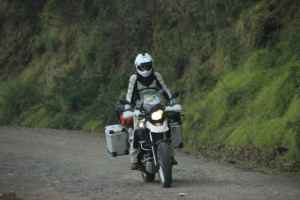 Soon the Quilotoa round will be fully asphalted 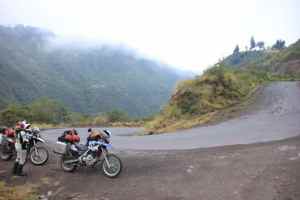 On the way back from Quilotoa

We ended up in a nice hostel, close to the Cotopaxi NP. A Swiss owned place with 5 huge Saint Bernard dogs that protect the place. It was quite a sight when I pulled up the place, stopping the engine and one, then two..three..finally 5 huge dogs approached and stared at me. I stood there for a moment not knowing what to do. I was afraid if I would get off the bike the calm dogs would suddenly turn into an aggressive pack of killerbeasts.

The swiss owner and his bernards

But another look at their sad and friendly eyes convinced me of their friendliness, which they immediately proved by cuddling up with me, once I got off the bike.

Dinner next to a fireplace made this day perfect.

1 thought on “The road to Quilotoa Crater”