Christy was not feeling well, so we took our time in the morning. We met Daniel an American lawyer who got into mining and owns a mine just inland of Trujillo. He invited us to stay with him if we would make it to his place. He goes to the Ecuadorian border 3 times a year to leave the country for a few minutes to renew his visa. He lives in Peru since almost 2 years like this and even though he is Mexican by birth and therefore has no language barrier at all, he told us he would have problems to get used to the country. As a business man it seems to be very difficult to get used to the Peruvian attitude to work and progress which is very different to what we are used in Europe or the US.

At 3pm we decided to keep going and to make it to either a campsite which has been recommended by a Frenchman we met in Baños or to Mancora a beach city further down the road.

The road was more or less all along the ocean side and really fantastic. The deep blue sea on our right and dry desert to our left.

We were welcome by Melba and her husband Jacques a Swiss from the French part of Switzerland. Their two dogs werebarking at us but they calmed down immediately and it turned out the dogs were very friendly once they get to know you.

One of the dogs is a Viringo, a Peruvian race which has no hairs and develops a higher body temperature. He looks pretty scary first and it is quite strange to touch him with his elephant like skin. He is really young and likes to play a lot and we had great fun with him. He is also making the place pretty safe, scaring everybody else away, even though that was not really necessary, since the area is very tranquilo.

A French couple on a 1 1/2 year trip through South America with their Toyota stayed on the campsite as well.

The campsite is really small and still under construction. But the facilities are very clean and good. The campsite is bordered by the seaside with a perfect sand beach. So we put up our tent just a few meters away from the beach and heard the waves all night long. Melba made dinner for us and it was delicious. We had a great evening speaking a wild mixture of French, Spanish and English. We watched sunset and were standing in the waves at night. The wind was cool, but with the feet in the warm sea we enjoyed the view of the moon reflecting in the Pacific Ocean.

The place was so peaceful, relaxing and beautiful, we decided to stay two nights. 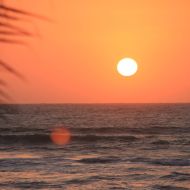 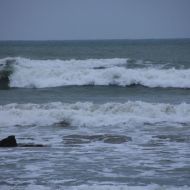 1 thought on “A little paradise”