It is unreal! I can feel the wind. I can feel the engine working hard underneath me. I feel the vibrations of the wheels spinning at 80km/h. I know I am riding a motorbike and I have it all cranked up. I go as fast as this 400ccm Honda dirt bike runs.

And still: I don’t seem to move.

I see the hexagonal shaped salt structures fly by and I know I am moving.

But the vast, completely flat, white and endless surface of the Salar doesn’t give my brain the usual information that we usually combine with moving. Everything that I can see except the ground seems to stand still. This place really plays tricks on your mind.

I am on the Salar de Uyuni.

It is the largest salt lake in the world and it is a magic place. 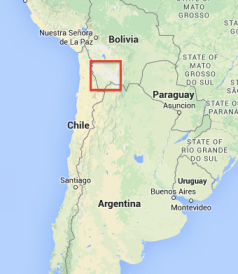 Originally we wanted to ride our bikes to one of the islands there and camp overnight. But we were unlucky with the weather. The evening before we wanted to go heavy rain softened the surface of the Salar. That is not a problem in terms of riding. But the salty water would get everywhere on the bike, causing problems everywhere, especially on the electronics.

We decided instead to rent some small 400ccm dirt bikes.

So the day after we rode our bike to MTB where Juan, our guide, was already waiting for us.

They have a really nice workshop there and a couple of different bikes.

We chose 400ccm Hondas and took off. We made a nice little loop on sandy roads to the eastern entrance of the salt lake.

Other than one would expect, you cannot enter the salt lake everywhere. There are only few entrances to the salt lake. Close to the land the salt surface gets very soft. Only few parts are solid. It is actually quite dangerous in some areas and a lot of people had to leave their bikes out there.

As we entered the Salar, we could see that large areas were covered in water. The salty water splashed over the bike, leaving a very thick rust of salt. You had to know the way very well. Once I got maybe 5m off the track and sank into the salt surface. I got out of the situation luckily by opening the throttle all the way.

On one of the little islands we had lunch. There are dozens of 4×4 standing around pouring hundreds of tourist on the little island. But that doesn’t reduce the magic of the place in any way.

In all directions it is white and flat. In the far distance you can see volcanoes that circle the salt lake.

The volcanoes are also one of the reasons why this is an important place for bolivian industry: the salt of the lake contains 70% of the worldwide lithium resources.

The surface is not entirely flat. When the salt had dried out some 20.000 years ago, it grew in hexagonal crystals which grew until the edges met each other. Water from underneath the salt lake moves up through these border lines, leaving salt crystals on the surface as the water vaporizes in the sun. The crystals stand out as high as 10cm, showing a pattern of hexagonal little walls as far as the eye can see.

Riding on the salt lake is like on tarmac. Not slippery as one could imagine. And it is great fun.

But we are happy we didn’t bring our own bikes. The small Hondas were covered in a thick salt layer.

We return to our little hotel after dark.

It was a perfect day and we need some time to allow the brain to accept that this place is real.

Juan, our guide from MTB

part of the Salar was covered in water.

You had to know where to go. A few meters off the track and you can sink your bike.

The hexagonal patterns is everywhere.

A “eye” in the salt lake. Little potholes where the water breaks through the solid surface.

salt crystals as they grow in the water.

The Island in the centre of the lake. 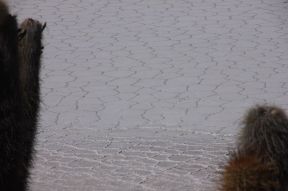 A lot of tourist are brought here by the organised tours.

The island is full of cactus

The dimensions are incredible

surrounded by volcanoes far away.

They get really salty. We were glad not to bring our own bikes. 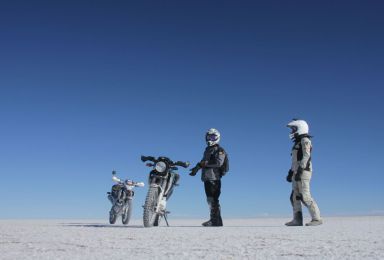 Juan and Christy. Like a walk on the moon… 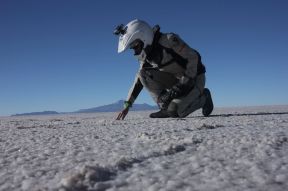 The surface is unreal: in detail as in the large scale 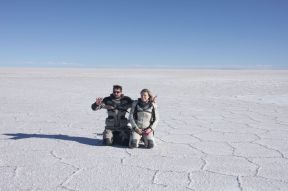 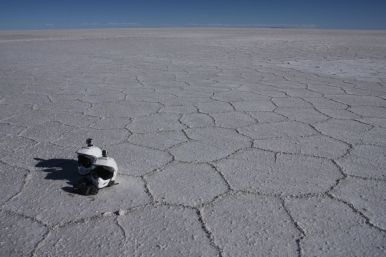 The pattern are just incredible. 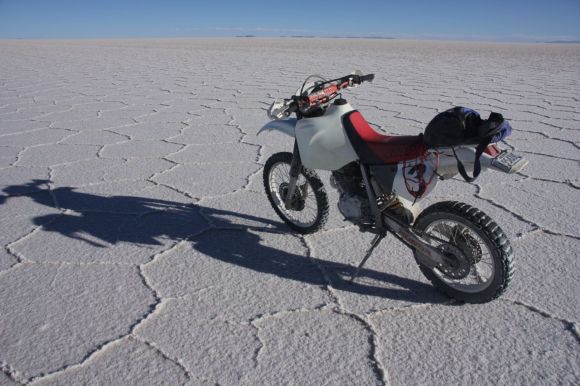