The copper mine made a great impression on us and so we continued the road to Antofagasta. We crossed the Atacama desert, one of the driest deserts on earth. It wasn’t a very pleasant ride. The landscape became less attractive and everywhere there were little mining cabins and trucks.

Every second car was a red pick-up truck from the national mining company Codelco. A lot of watertrucks passed us on their way to the big mining sites near Calama.

We stayed in a good hotel in Antofagasta and even the car-park there told you that all there is going on in this region is about mining. Beside our motorbikes there were only pick-ups from mining companies.

We continued our way south and the PanAm gets really boring as it gets more inland. Not that the landscape is ugly, but it gets quite repetitive. The only interruption was a sculpture that an artist put up in the desert. The hand of the desert is right next to the PanAm and so we took a short break there in the shadowless boiling heat of the desert.

After 300km of heat and desert the landscape becomes more hilly and nicer. We finally turned off the PanAm to get to the coast to a nice little national park. The NP Pan de Azucar offers a lot of plants (mainly little cactus) that only life in this little area. It is a wonderful landscape as well. The area doesnt get any rain at all. But it gets humid with clouds and fog that rolls in from the coast. We had blue sky and sun all day long, but as we approach the national park the sky gets cloudy. We arrived at the coast on a campsite.

It is a quite little bay with a perfect sand beach, rocks on both ends of the 1km beach.

There are little shelters for cooking set up. All very nicely. We are the only guests. The owners live in a couple of little huts where fishermen have their boats. So we make our dinner and enjoying the beach and the stars all by ourselves. It is beautiful. 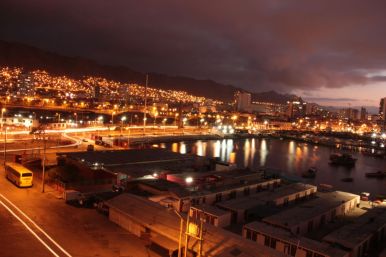 From our Hotel we had a nice view on the fishermen’s work. The pelicans watched them as well, hoping there would be an easy breakfast

The monument is pretty nice in this environment…

I didn’t really make it in time for our selfie…

Now this time I almost made it…

I got tired of running around in the heat, so I put the camera a bit closer and finally made in time… 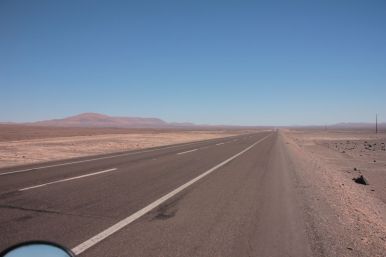 Looong streches of nothing 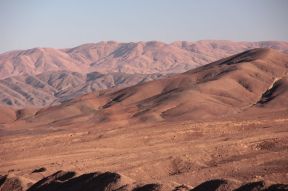 A small motorbiker in the vast country

It became more hilly as we kept going south.

The last bit was quite nice

On the way to the Azucar NP

The road there was beautiful.

Our campsite… all alone 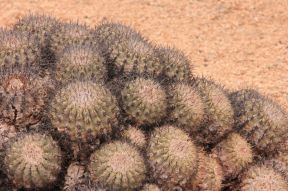 These are no billiard balls, but a special cactus that is only growing in this NP

After dark we played around with the camera and Christy wrote my name with her flashlight really nicely. She had to write in reverse and it turned out she is a natural talent to as it is not as easy.

My attempts were less flattering. These are my best tries (out of many, many, many). 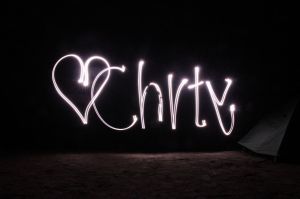 That went well… oh there is a letter missing…

…. and another one missing, and why can’t I get the Y right?

After many other triesI finally gave up and just gave her a kiss instead.

1 thought on “Campsite at the beach”