After a restless night’s sleep, my foot was still hurting madly so headed out to the hospital for an x-ray. I’d been researching online about strains and sprains to know how long I’d be laid up, what to could expect.

Andy got a wheelchair from hospital staff when we arrived there. (I think nobody there could stand to see me hobble around either.) How nice that felt to not have to walk! It also ensured I was sitting when the x-ray came back. I sort of just stared at the doctor in disbelief as he showed me the breaks. How long will this take? Some absurd estimates were thrown around and ended with me understanding that if I screwed it up, I might need a surgery to line up the bones again. So far, it was the luck in this misfortune that the breaks were clean and not displaced. And I get to make a choice (yippee!)… a solid plaster cast for 6-8 weeks or a stiff removable boot that I have to wear day and night at first and then see how it progresses. That was an easy one. We went on a little shopping spree at the orthopedic supply shop down the road for a new boot and threw in some crutches to go with it.

More difficult choices were ahead. We left the hospital and I had no idea how we were going to continue our trip. We wouldn’t be sitting it out in Coyhaique. Stopping or going home didn’t cross my mind, I was too busy trying to figure out how we’d continue on.

After about a week of what felt like denial, I started researching for a local orthopedic doctor. We had questions we were too stunned to ask initially. I came across a blog of a pair of world travellers on a bike and got in touch with Ivana. She had broken her leg and was treated in Coyhaique a couple months earlier. She had a surgery to insert several pins in her leg and after several weeks, had continued on south by hitch hiking while her partner continued on their bike. That’s tough! Ivana was encouraging, and informative about the local doctors. I’m glad we’re in touch now to follow up how the travels are going. In the meantime, they are riding two-up again somewhere in the Atacama desert.

What are you doing New Year’s?

The x-ray answered the question we’d be asking for the past year, “Where do you think we’ll be for the holidays?” In the beginning, we speculated Ushuaia. Then we thought we should be past there so we could have plenty of time to loop up to see Iguazu and into southern Brazil to visit my colleagues there. Recently we’d revised the estimate to somewhere around Torres del Paine. We came committed to the road, not to a set route. When I found out my foot was broken, we just went with it. We’d sit out two weeks in Coyhaique for the holidays and decide from there. How long can a foot take to heal anyway? (And when will it stop swelling and hurting?)

Two weeks passed quickly while we were doing a bunch of absolutely nothing. I was content with my small trips around the cabin. Oh yeah, and we got a cabin! The hostel owner couldn’t stand seeing me go up and down those stairs any longer, so we were moved to a cabin across the street. ‘Twas the Christmas season and all… Very kind of her! So we had a cozy little fire, Andy stocked the fridge, and my days consisted mainly of wobbling from the bed to sofa.

That sofa is really memorable. I would just sink in and prop up my foot. When I was on FaceTime with Julia, she remarked how it looked like I was in a sea of roses. Yep, the pink posy print matched the curtains. But the sofa had seen better days. The cushions were worn out and rising from it was like lifting myself out of a deep hole. Everyone without crutches looked stiff and old getting up from it. With my crutches, I felt like a giraffe, so it was good for a smile or laugh every time.

Strangely enough we didn’t really go stir crazy. We just kind of chilled out and were astonished how two weeks can slip by nearly unnoticed.

Evaluating plans B, C and D

There were still quite a few highlights to come in the area and we wanted to get out exploring again. We just had to figure out how. In the best case, we’d be able to travel together or at least sort of coordinated so that we could see and experience sights at El Calafate and Torres del Paine together.

We could park the bikes and rent a car for a couple of weeks, but then we’d have to come back to Coyhaique and riding out of their meant dirt and gravel roads. I had no idea how long it would be before I could manage just any kind of unpaved road well again. We’d also have to get something worked out for the board crossing and customs since we’d exit without the bikes that were noted in our passports. It would all be possible, but this didn’t quite feel like the right solution.

I started looking into the many boat options around. If we could find a cruise operator that had a ship equipped to roll the bikes on, maybe we could just set sail for the south to Punta Arenas or Ushuaia while my foot heals and then ride back up north. It would allow us to travel together and would add a pretty neat aspect to the travel. We both enjoy boats and this would be an unforgettable way to see the icebergs and fjords of the region. Bot the cruises are not only pricey, they also fill up quickly and don’t have the flexibility we’d need to take the bikes with us.

There are some online travel groups, but I decided to start small and just send a few quick notes out to people we’d met along the way and other travelers we know. No familiar overlanders were nearby, and we didn’t meet any in town with similar plans. Sonia from Motoaventura told me that the paperwork to transfer my bike over the boarder to Argentina by someone else would be a hassle at the notary, especially around the holidays, but they could transport it within Chile if that would help. She also gave me the number of their contact person in Coyhaique, Rolf Traeger. We got in touch and it turns out, he’s a biker and has a car rental company. That got us thinking. How about we put our bikes up on the back of on one of his rental 4×4 pickups? He agreed. After a short discussion about how to do it, he and his team spent half a day welding a frame and tracks into a truck, then they helped load up our bikes and we were on our way. We could take the truck one way to Punta Arenas, Ushuaia, or elsewhere. This solution really fit the bill: we’d get to travel together, the bikes were with us, we could be flexible and it added a really fun aspect to the travel.

great to be back on the road 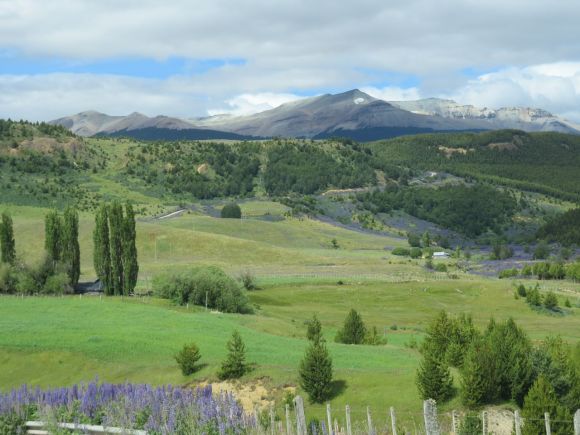 amazing! this is just right out of Coyhaique.