The ride from Puerto Natales to Punta Arenas was kind of unremarkable. The only interesting thing is the vastness. It is flat and the flora is very reduced. This open land is dong something with your mind. Every time we stop I get on the road and look in both directions. These long lines of the road going all the way to the horizon make you wanting to follow these lines. They pull your mind away. It is quite an experience.

The wind is very strong. The few bushes that are growing here are forced to grow into the direction the wind pushes them to. There is a penguin colony with king penguins on the way. But after we have approached the entrance we realize that the wind is too strong for Christy. It is impossible to walk on crutches in this wind.

Punta Arenas has a big harbor and lots of bikers start or end their trip here. For us it is only a short stopover and we continue the following day to Ushuaia

Again the landscape is pretty flat with little vegetation. The amount of Guanacos we see is getting less and less. We saw a couple of foxes though. Just 50km before Ushuaia the landscape changes though. First the trees start. They are covered in moss hanging from their branches like old spider webs. It gets more green and hilly. The road changes from a boring straight line to a fantastic mountain road, crossing a small mountain pass just before reaching Ushuaia

The road continues a little bit further on into a little national park. This is where the network of streets of South America ends.

You can not get further south on a motorbike. But you don’t really understand where you are until you have a look at a world map… That is what really blew our mind. 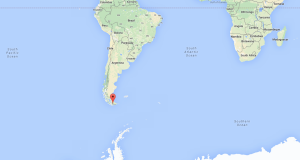 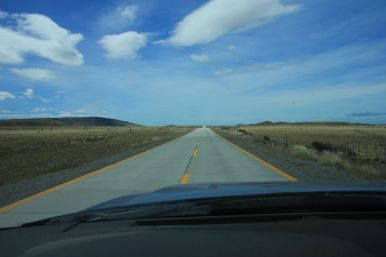 The roads here are really straight… and the land is flat

Sign at one of the few cafes on the road…

The wind is strong here. These trees can tell you about it…

On the ferry to Tierra del Fuego.

Most of the roads are paved, but some parts are still gravel. It doesn’t change anything on the flatness of the surroundings though…

A fox… we saw quite many of them 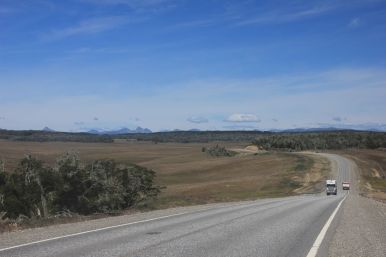 As it goes closer to the Ushuaia it gets a little bit more hilly. And trees reappear….

There are lots of horses here. Some just seem to run around free here…

The end of all streets…. We put the helmets with us on the pictures… just because we COULD have been here on motorbikes :))

Ushuaia is a little town with steep streets

2 thoughts on “Ushuaia: To the end of all roads”