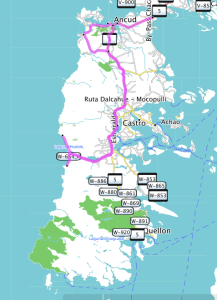 After we gave back our truck we stayed in a hostel for a week. It was very nice with a great view on the harbor of Puerto Montt where huge cruise ships anchored and big birds flew by our window every day.

Christy was getting better every day, but the doctor we visited here said she should rest another week before we can get back on the bikes.

After a few days I got bored and I decided to take the bike for a little spin on the Island of Chiloe.

So I packed some things together and rode on south to the short ferry crossing that would take me to Chiloe.

It was great to be back on the bike again. After the short ferry crossing I took the road to Ancud and further to a penguin colony. The ride was fantastic. A curvy road, the sun shining, little traffic and finally the rocky coast of the island. The road ended in a beach from where little boats take the tourists very close to the penguins. I decided not to join them and instead enjoyed the fantastic beach that ended on both sides in huge rock formations.

In kept going south and rode great gravel roads through forests and farming areas. All very nice and enjoyable. When I finally ended up in the little town of Castro I had a day full of great riding and I enjoyed a beer with some life music that was played in front of the colorful church of the town.

The next day I headed southwest to Culcao and Quilan. The road got a bit sandy and I enjoyed playing with the bike in the sandy bits. It was never difficult there though. The road ends at a parking spot from where you could hike 45 minutes to an outlook. The guard at the parking told me I may go there by bike that I intended to do immediately. The track was wide in the beginning and easy, but soon it turned into a very steep narrow track with big steps. It was great fun to ride it, but it would be unnerving if I met hikers on this track. There was no way to bypass hikers. So after a while I turned around and rode the steep track down again.

The landscape was incredible. The steaming and roaring sea covered the coast in a mist of salty water. Steep cliffs and flat sand beaches formed the coast. Riding was a blast and so I returned back to the north with a big smile on my face.

Short stops at some of the beautiful wooden churches contributed to these great days I had on that island. It is really great motorbike country here. 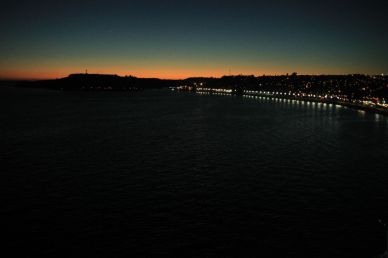 We relaxed in a note with a great view on the harbour of Puerto Montt.

We were really lazy. We had to kill a week before Christy could go back on the road. 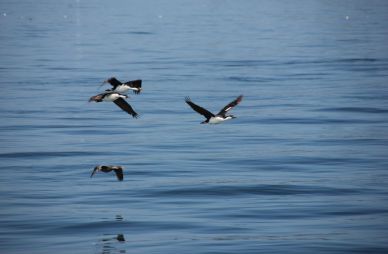 The ferry crossing to Chiloe is short, but lots of birds, sea lions and even penguins follow the ferry.

On the northern coast of Chiloe

The cost is pretty rocky at times…

A nice beach. Nearby are little islands with a penguin colony. 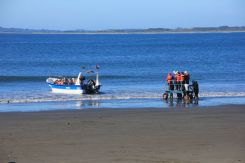 In little boats tourists are getting transported to the penguin islands. I passed this… 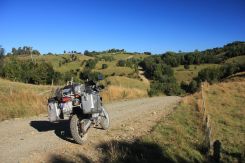 The inland of the islands has many kilometres of nice gravel roads. 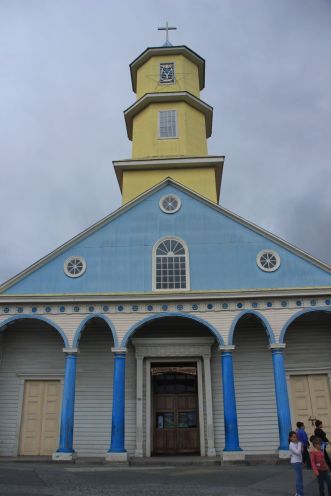 Many old wooden churches are the main attractions of the island. 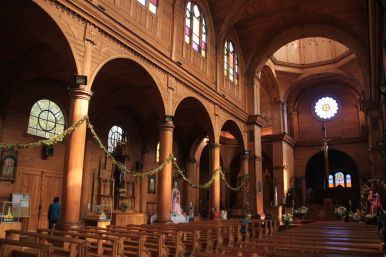 Castro has some nice houses and is a little clam town.

On the road to Cucao. 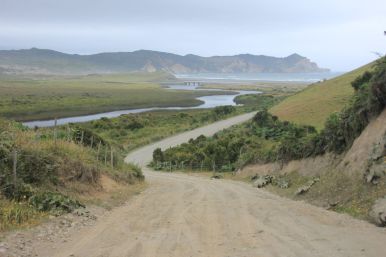 A gravel road led to Quilao, a nice lookout. 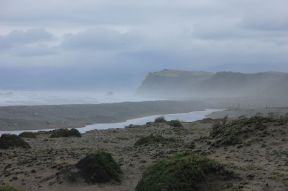 The landscape is stunning. 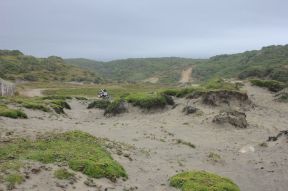 Partly sandy roads allowed me to play around with the bike… Yipiiieeehhh. It was great to be back on the bike.