The following day was offering a great surprise as we expected a little bit boring riding. Instead we followed the Rio Limay north in an amazing valley. Rocky needles and walls on both sides of the valley accompany a green winding river. The road is in good condition and so riding is a blast. When we stopped for gas the whole valley was covered in dust. The fine dust was everywhere in the air. A small and dusty dry riverbed crosses the valley of Rio Limay and the strong wind blows up the particles in the air and into the valley. We followed the cloud of dust for many kilometers until the valley opened up and formed a huge lake. The landscape became less and less hilly until it became what we expected: vast, flat, boring.

We stopped in little roadside hotels in little towns with nothing to offer. Except one thing: it is Argentina here! So we enjoyed the great steaks for dinner.

We past an area where they produce a lot of fruits. On both sides of the road endless fields of apple trees. Heavy trucks transport the fruits on the road. The heavy load is often secured very poorly on the trucks, so we keep our distance when we pass them. On one of the stops we meet Karl from Türkenfeld, not 30km from Munich. He is a great guy travelling the world without speaking anything else than Bavarian. We shared a coffee and had a great chat with him. He had quite some stories to tell.

The more east we got the dryer and vast the countryside became.

We stopped 2 more times before we reached Azul a little boring town with nothing to see, except La Posta and Jorge. But that is something for the next blog entry….

The Rio Limay has cut a fantastic valley into the mountains here.

Christy is still using here crutches to get around.

It was very hot that day.

Great rock needles on both sides of the road.

We didn’t expect this at all and we were happy that we turned around the day before. We would have bypassed this road.

Strong wind blew the fine dust into the air. 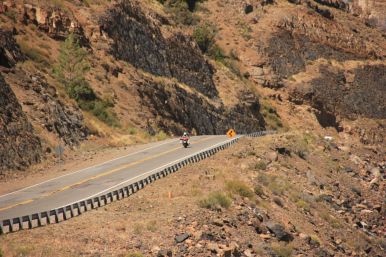 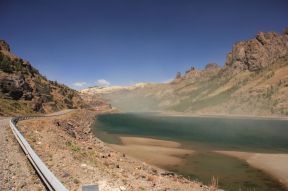 We followed the dust for many kilometres.

Strong winds and the heat created many of these little wind funnels.

Little traffic and a joyful day on the bikes.

We rode till dark…

Break in a field of fruits.

This road went straight for 130km!

No change all day long. Vast and flat. 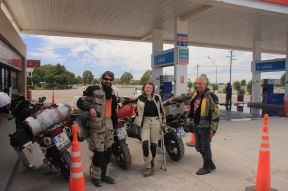 Karl, a great guy with loads of stories. We already look forward to meet him in Munich. 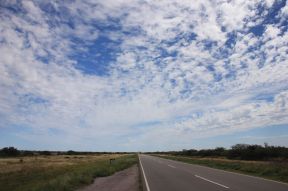 We see these windmills everywhere…