It is sooo relaxing. We hang around in the garden, read, take a nap and eat cookies. The two bunnies hop around and pop up their ears once in a while. The ducks do their parade along the little pond and the flamingos just stand there and enjoy the sun easily balancing on one foot the whole day. The sun is warm and a little breeze is creating the perfect weather condition to hang around and do a lot of absolutely nothing.

We heard of this place before. And indeed it is a little paradise. Jorge aka Pollo welcomes motorbike travellers here since almost 25 years. All the famous names of world travelling have left little remarks and greetings on the wall. Many travellers of all over the world have been here. Especially many Japanese and they seem to have a talent for nice drawings. For hours we were standing in front of the walls of La Posta’s dining room and reading the comments from other travellers.

Jorge lives in his little house in the backside of the garden, together with his family. He is working on the garden the whole day. He loves doing it. The garden is full of neat little things (like the windmill built out of oil barrels) Jorge is a very special person: he is so kind, so gentle, so welcoming, that just hang out in his garden with all the animals gives your mind a very peaceful rest.

We enjoyed it a lot and according to all the comments on the wall we were not the only ones feeling like that.

We arrived here on a Saturday. BIG MISTAKE, since on Fridays Pollo makes his (literally) world-famous barbeque. He immediately asked for how long we would stay and thought of making another BBQ for us on Monday.

Unfortunately we had to go on to Buenos Aires to get our shipping for the bikes organized. So we can only guess by other guests comments of how special it must be.

So after one day rest we continued to Buenos Aires, our final destination on our half a year trip.

We were glad to have the opportunity to stay here and have a calm day before we hit the mega city Buenos Aires.

Thank you Jorge for putting up and keeping such a fantastic place.

The garden is really nice…

Some food was the only interruption of doing absolutely nothing.

“I think I have an itch somewhere down there…”

Who came up with this nose design?

There are a couple of other birds and animals running around in the garden.

Comments from other travellers everywhere ….

The japanese are especially creative 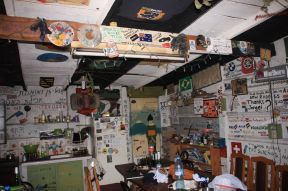 Jorge has a little house for parties, hanging around and enjoy the evenings.